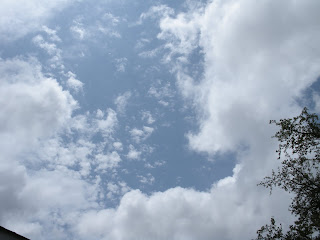 My word for 2010 was "new." I am ashamed to say that after the first few weeks it sort of faded from my consciousness. I even had trouble remembering what it was when I began to think about my word for 2011. However, I have a Father who is faithful even when I am not, and looking back I can see the places in my life where He was doing something new.

He began to speak a new word into my heart several months ago. I had a bit of difficulty hearing it above all the noise. In fact, I was having difficulty just concentrating - finding I couldn't capture and retain the important things because they were getting lost in the clamor.

One afternoon, I was trying desperately to remember the wonderful idea for a blog post the Father had put on my heart while I was out walking. It was there somewhere, but it kept flitting around just beyond my reach. Frustrated, I reached out and turned off the radio. In the silence the thought returned - clear and complete. It was a wake-up call.

This word suddenly began to show up in blog posts - standing out in big bold letters to eyes that were finally beginning to see.

Then in an off-hand comment by my grandson - I found that this simple word had a dual meaning for me.

My word for this year is "Quiet."

Prayer and the Word are staples of a spiritual diet but so too is simply being quiet before the Lord. There is so much noise all around me that it becomes almost impossible to hear that still, small voice. I must be deliberate about turning off the noise. That gentle whisper comes at the most unexpected times - standing at the kitchen sink washing dishes, making the beds, folding the laundry, simply sitting quietly. I don't want to miss it.

The other side of quiet is getting control of my tongue. I am astonished, when I take a moment to notice, how often I interrupt and talk over other people - people who are precious to me. I often squirm when I mull over conversations I've had and realize I've said way too much or precisely the wrong thing. I seem to think that it is some sort of social "crime" when conversation stalls and rush to fill the gap with words. I end up feeling exhausted - because for an introvert it is all such a struggle.

I am giving it all to the Father, and I am going to rest in the stillness as much as I am able. I am asking for grace to listen - truly listen - and to talk wisely.

My verse is Psalm 62:5
"Let all that I am wait quietly before God, for my hope is in Him."


Do you have a new word for this year? I'd love to hear about it.