Written With Fear and Trepidation 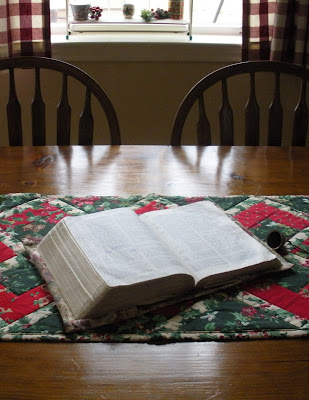 I'm not at all good at writing essays. Somewhere between my head and the paper my thoughts get all twisted and nothing is as I had imagined it would be. Nevertheless, I'm going to try to wrestle some thoughts that have made their way from my head to my heart onto this screen. My heart feels the weight of them and thumps loudly while my fingers try to find the right keys. I'd much rather tell a little story, but this won't let me rest.

As a young wife and mother, I wanted nothing more than to do it all well. I wanted to be like the godly women I admired and be a blessing to my family and those around me. I read every book on marriage, family and being a godly woman I could get my hands on. They were written by men and women who loved the Lord and had a message burning in their souls.

In my imagination, I transport my sixty-six year old self back forty years or so and am once again a young wife and mother - the same one who wants desperately to be all God intended. If I were to gather together the books being written today by gifted godly men and women, I would get a very different message from the one I received all those years ago.

I am not here to judge which was the right message. I am simply going to share what I've learned over a lifetime of seeking God (and more often than not failing to do it well). When I read those books, I tried my very best to be all they told me I ought to be. It often ended in discouragement and feelings of guilt. I couldn't quite measure up.

It was during one of those seasons that I stopped the trying and became quiet enough to listen. I believe I heard the Father tell me to put those books, as good as they were, aside and pick up His Word. "If I can speak to them, I can speak to you child. I know you better than you know yourself. Let me give you words just for you."

And so it has been. I don't mean to say I never read Christian books. I have shelves lined with them. They have blessed me in so many ways. But I need the foundational truth of the living Word.

It seems as though the world is abuzz with arguments for and against - words beating up against each other and often beating up those who read them. I find myself desperate for His word to be heard above the clamor in my head.

There is a little exchange between Jesus and His disciples I had never thought much about before. He has just come down from the Mount of Transfiguration. He finds his disciples have been trying desperately to cast a demon out of a man's son. They are in the middle of a crowd, arguing with the religious leaders. And Jesus says:

Instead of praying, instead of doing what He had taught them to do - they were arguing.

I write this to remind myself more than anything. There are many words being written. I am a reader. I love reading those words, but I confess some have left me confused and upset. I need to line those words up with those I know are absolute truth. Only then can I use the words of others wisely.