People are funny. I think that's a line from a very old television show. However that doesn't discount its veracity. I'm a people, and I can be so funny at times. Not exactly the "Ha Ha!" funny - the silly kind of funny.

As those of you who read my blog (and thank you so much for reading my blog) can attest, we've gone through a rather difficult spell. There's the house business I really can't talk about right now, and the torn retina, and the car accident - not to mention the trips to the ER with my 95 year old Dad and the just plain hard stuff that comes with much loved, aging parents.

I've had my moments - lots of moments. But I believe God is good, all the time - and with lots of love, support and prayers we've been taking one step at a time and making it through. In fact I thought I was doing fairly well until "the faucet."

Isn't it funny the way we can somehow make it through those dark times and then one seemingly insignificant thing goes wrong, and Shazam! - everything falls to pieces?

For the first couple of years in our new home, the kitchen faucet behaved just as kitchen faucets are meant to behave. You turned on the handles and a full-bodied stream of water poured forth. Several months ago, the flow suddenly diminished right down to a little pathetic trickle (I exaggerate, but it seemed that way.) 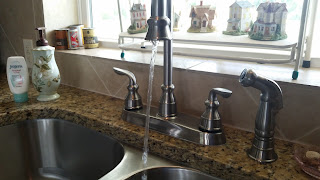 My husband spent a great deal of time out at the little pump house trying to discover the source of the problem - to no avail. Every other faucet in the house sent out gushing streams of water - all except that fool kitchen one.

Then one day as I was attempting to wash dishes, there was a little "hiccup," and the water began to flow through that faucet like nobody's business. Hallelujah! I gave thanks every time I turned it on.


Imagine my dismay when, a few weeks later, another little "hiccup" signaled the end of flowing waters and brought back the pathetic little stream. I could have screamed. Somehow I could deal with all the other stuff, but this was just one thing too many.

These pictures don't really do it justice. I think the camera adds a bit of "weight" to the water flow:) Honestly. It. is. so. annoying! If you want a sink full of warm soapy water in which to wash a few things, you can simply turn on the faucet, go read a chapter in a book or fold the clothes, or have a cup of tea and then come back to see if possibly the sink is half-filled yet.

Or you can put the big water pitcher under the faucet and go get the mail before it fills to the brim. It gives new meaning to the word multi-tasking. 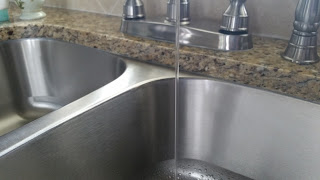 Honestly, there are moments I'd like to rip it right off its stingy little pedestal. I've also been tempted to throw myself down and have a fit right there in the middle of the kitchen floor.

Of course, I haven't done either of these things, because my fixer-upper husband is trying to recover from a very bad chest contusion, and I don't think crawling around under the sink or messing around in the pump house is exactly what the doctor ordered right now.

Thanks for letting me vent :)  I'm much better now.
Linda
Posted by Linda at 2:59 PM