Letter To A Friend 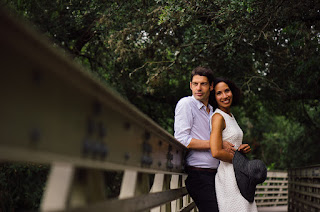 I'm sorry it's taken me so long to write.  After everyone left, we did all the usual strip-the-beds, wash the sheets, towels and dirty clothes, remake the beds, straighten and clean up a bit. Then we crashed!

However, I know you want to know all about the wedding - so here goes. Remember my telling you I was a bit nervous? After all, there we were - five days before the wedding, and we hadn't even met our future son-in-law.

There was absolutely no need to be nervous. We fell in love with him within about ten minutes of meeting him. He is warm, kind, out-going, intelligent - we are so happy for Lisa. He obviously loves her very much.

Lisa had planned a very busy week for the two of them. They drove to Austin to meet friends, took my Mom and Dad out to dinner, met with her stylist and florist, and had pre-wedding pictures taken at a park in San Antonio. You know Lisa; she is the most organized person I know. I just sort of stand back and watch her dash from one thing to the next. Somehow it all gets done well.

You know how ridiculously hot it's been here. Triple digits day after hot, miserable day. The day of the wedding, they predicted showers for the afternoon. We haven't had rain in weeks, but the ceremony was to take place on the terrace outside the restaurant so we actually hoped it wouldn't rain.

Right around two o'clock it poured. I could almost hear the poor little wilted flowers in my garden rejoicing. It didn't last long, but the most amazing thing happened. The temperature dropped by about twenty degrees. What a heaven-sent blessing.

We gathered on the terrace at 5:30, just a small group of family and friends, and watched as Lisa and Dom became husband and wife. It was lovely. I have to tell you one little thing. You know how emotional our sweet girl is. She made it through the first part of the ceremony, but when it came to saying the vows she had prepared, the tears started.

I started fishing around in my purse for a tissue, but Dom had come prepared. He reached into the inside pocket of his jacket and pulled out a little flower patterned pack of tissues. He pulled one out and gently placed it in her hands. So sweet.

After the ceremony we had a delicious dinner and lots of good talk and laughter. It was everything I could have wished for for her. She has been through so much in the past couple of years. I am so thankful for all the Lord has done in her life - right down to cooling things off for the ceremony.

Here are a few pictures I took. The photographer was amazing, but we don't have the "official" pictures yet. 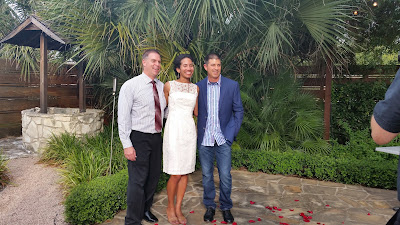 I can't remember the last time I had a picture of my just my three kiddos together. 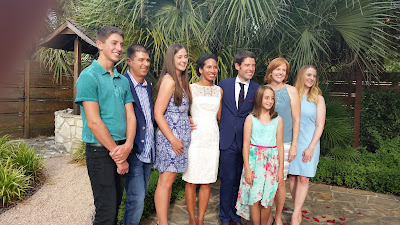 Here's Scott and his family with Lisa and Dom. Only one missing. Their oldest son couldn't make it. 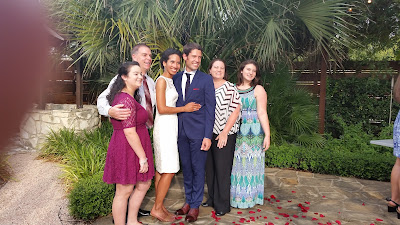 Todd and his girls.

Lisa and Dom stayed with us until Thursday morning when they moved all of their things to the hotel where they would spend their wedding night. That left room for our oldest granddaughter and her boyfriend. They drove in from Dallas on Thursday afternoon.

We all got together Friday afternoon for one last time together before Lisa and Dom flew home to Paris.   Lunch at the Alamo Cafe.

That evening everyone came to our house for games and ice cream sodas. It was such fun to have everyone together in one place at one time. It just doesn't happen often enough now that the grands are older and have so many activities of their own. 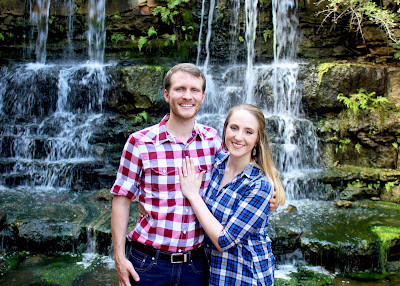 So….there's another wedding in our future!

Hope all is well with you. I'll send more pictures when we get them.