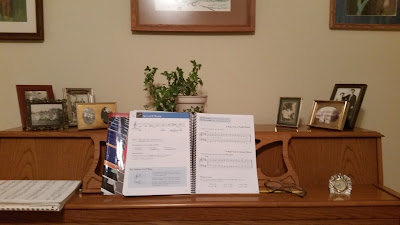 It's been nearly a year since we moved my elderly parents into a nearby Assisted Living facility. After sorting through sixty-eight years of living - slipping precious memories into the hands of children, grandchildren and great-grandchildren and auctioning off whatever remained - they set up housekeeping in a tiny 450 square foot apartment. We arranged and rearranged the essential pieces of furniture and the special items they couldn't bear to part with, trying to fit them in and still leave a little space in which to move.

The apartment that had, on first examination, been deemed roomy now seemed cramped and stuffy. It didn't take long for the complaints about "not enough room to start".

Week after week my Mom wheeled her walker down the hall to the director's office to ask for a bigger apartment. Somehow she had convinced herself that their apartment had been designed for just one person. Unfortunately there were no larger apartments available. Promises of being the first in line when one became available did little to smooth their ruffled feathers.

The rest of this little story is over at Laced With Grace. I'd be grateful if you popped over there!