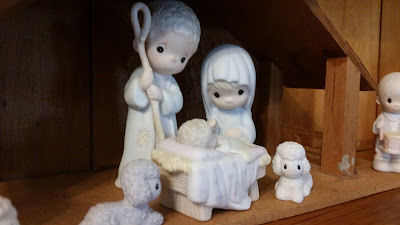 "Mary lay and pondered
'till her eyes became too heavy,
and she finally found the rest
she'd struggled for.

Joseph sat in silence
and watched the baby sleeping
And wondered what the future
held in store.
Angel voices whispered in his ear;
Reaching down, he drew the baby near." *

It is the greatest story ever told. It captures our hearts in a way no other story ever can. We are wide-eyed at the wonder of a God who loved with such extravagant love and who worked in ways we would never have imagined.

If we were "casting" this story, it isn't likely we would have picked an obscure, teenage girl to be the mother of God's son. Nor would we have chosen a poor, unknown man to play the part of the man she was engaged to marry. But God knew.

I have been thinking about that man, Joseph, for days as I read through my Advent devotionals. He must have been kind and gentle. But he must have had a measure of pride, just as we all do. A pride he had to put aside as he embraced his pregnant fiancee and God's plan for their lives.

I imagine him sitting beside the manger. He had just made the long, difficult journey to Bethlehem, with Mary ready to give birth at any time. With every step he must have felt the need to hurry while trying to be so very careful. Then when they had finally reached the end of the journey and the labor pains began, he couldn't find a place for them to stay. His heart must have raced as he knocked on doors and was turned away time after time. Ending up in a stable - the best he could do for God's Son.

A first baby. All alone - having to deliver Him by himself. No - it couldn't have been as he had planned.

When rest finally came, what must he have been thinking? Did he hope that they had come through the worst of it? Did he imagine God stepping in and providing all the things they would need? Did he hope to go back home where, in spite of the "knowing" looks from neighbors, he could pick up his trade and provide for his little family? Surely, after the wondrous visit from the shepherds, God had something miraculous up His sleeve. Maybe (Did he dare to dream it?), everyone would realize the Messiah had come, and their lives would be more amazing than they had every imagined.

We know that nothing happened to make life easier for them. We read about the harrowing escape to Egypt, at the angel's prompting - another long journey far from home. Eventually they returned to Nazareth and a quiet, ordinary life.

Life can be just plain hard sometimes. We do our best to follow the Lord with obedient hearts and hope it will cause everything to go well. Somewhere, deep in our hearts, we feel we "deserve" it. After all, haven't we done everything God asked us to do? Far too often, it continues to be difficult and, we think, so ordinary. But God does have a plan - a plan for our good - even when it looks like nothing is going right.

He asks us to take one step after another, trusting Him with the destination. Joseph's life may have looked hard and ordinary to others, but his faithful obedience was working something grand.

*"Little One" by Shirley Watson