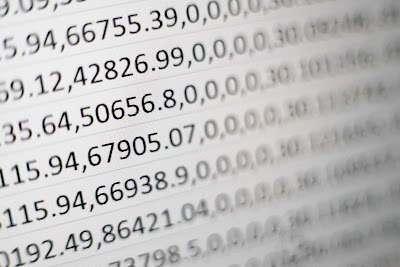 We live in a world of numbers.  Hold that thought for a minute while I take us back to a time long ago and far away.

My grandchildren look at me with wonder when I tell them we didn't have cell phones when I was growing up. They cannot imagine such a world. I sometimes find it hard to imagine myself. Wonder of wonders - we did.

However, I seem to have moved with surprising ease into a world where forgetting to take my cell phone with me brings on a mild panic attack. It began innocently enough with the desire to keep in touch with family and friends. After all, the grandkids are all on instagram and facebook. What could be easier than scrolling through my feed to see their posts?

Perhaps it begins that way for most of us, but somewhere along the way we become aware of such things as "likes" and "comments" and we find ourselves caught up in an unexpected contest. As a teenager it took the form of being in the "right" group. Who didn't want to be in the popular crowd (am I dating myself here)? The need for approval seems a bit obvious in that context, but I believe things haven't changed all that much.

Now our desire for approval has made its way to the internet. How many views will my youtube video get? Will it go viral? Will everybody like me? What about the post I wrote? Does it resonate with lots of people? Will it somehow make me "known"? If I get enough followers, will I be able to sell my work? If no-one responds, does it mean I'm a failure? On and on it goes.

I don't believe our need for approval is a bad thing. However, the places we go to find it can often lead on an endless cycle of trying and failing and trying again. All it takes is one unkind comment to send us spiraling into discouragement.

We were made to find our approval in the One who knows us better than anyone else. The One who sees into the very heart of us and loves us just the way we are. Incredibly, He loves us even when we aren't at our best.

When God looks at us He sees only one number - His one and only Son and through Him....me.

Blessings,
Linda
Photo by Mika Baumeister on Unsplash
Posted by Linda at 8:55 AM