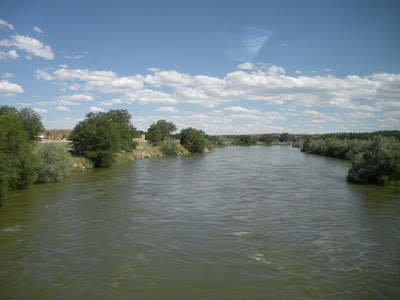 The book of Joshua in the Old Testament begins with the Lord’s charge to Joshua. Moses has died and leadership has transferred to Joshua. The time has come for the Nation of Israel to take the land the Lord has promised them.

Joshua sends two men to spy out the land on the other side of the Jordan River. After spending a few days in enemy territory where they narrowly escaped discovery with the help of a woman named Rahab, they come back with their report:

“The Lord has given us the whole land,” they said, “for all the people in the land are terrified of us.”  Joshua 2:26

Now after forty years of wandering in the wilderness the people prepare, to step into the Promised Land, but first they must cross over the Jordan River. It is harvest season and the Jordan River is overflowing its banks.

Following the Lord’s instructions, Joshua has twelve priests who carried the Ark of the Covenant walk ahead of the Israelites. As soon as their feet touched the water, the river stood up like a wall. The priests stood with the Ark in the middle of the river and all the people walked across on dry ground. When the whole nation of Israel had crossed over, the Lord told Joshua to choose twelve men to take twelve stones from the very place where the priests were standing in the middle of the Jordan.

“Each of you must pick up one stone and carry it out on your shoulder - twelve stones in all, one for each of the twelve tribes of Israel.  We will use these stones to build a memorial.
In the future your children will ask you, ‘What do these stones mean?’ Then you will can tell them, ‘ They remind us that the Jordan River stopped flowing when the Ark of the Lord’s Covenant went across.’ These stones will stand as a memorial among the people of Israel forever.”   Joshua 4: 5-7

Over and over we see in scripture stories similar to this one where the Lord instructs His people to remember - to set up memorials or write the words in a book so that future generations will know what the Lord has done for them.

This past Sunday we celebrated the 40th Anniversary of Calvary Temple Church. Pastor Doug led us in looking back over the years of God’s faithfulness to His people.

From a big step of faith and a small beginning, He has grown a family of people who love and serve Him. It is good for us to remember and to tell the generations that will follow all the ways that God has faithfully and, often times miraculously, met every need.

There will always be times of difficulty, but when we look back at all the Lord has done we will be encouraged to continue to lovingly serve one another and the world around us.