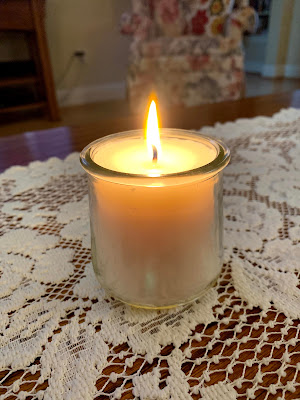 “More than once Jesus deliberately addressed certain issues that quickly diminished the number of onlookers. It was commitment that thinned the ranks.”- Chuck Swindoll

We don’t have to look far in recent days to find vivid examples of commitment. At any given moment we can view images of people gathered together to make their call for change heard. They have put action to their words and sacrificed to take a stand.

Others have made a commitment to things we believe are not right. They too have put action to their words - in the form of hateful rhetoric and violent behavior.

It’s easy to give lip service to the things we say we believe. The hard part is being utterly committed and willing to passionately defend the truths we so easily espouse. Jesus calls His Church to a life fully surrendered to Him that it may shine like a light into a world sinking into darkness.

Words about giving our all to Jesus slip smoothly off the tongue when everything is going well, but when heartache and adversity come they offer small comfort. When our faith is tested, when we’re called to take a stand for truth in the face of opposition, when we must make a choice between comfort and sacrifice - it is then that our commitment to Him is put to the test.

When Abraham raised the knife to sacrifice his only son in obedience to God’s command; when Daniel walked into a den of lions rather than deny his Lord; when three young men refused to bow down to an idol and went willingly into a fiery furnace - they showed us what a committed life looks like.

The truth is, the Church in our own country has become a bit too comfortable - we might even say complacent. For too long we have gone about “business as usual” while those opposed to God’s truth have been working hard to advance their own ideals. We would do well to follow their example.

Just as He did in the days He walked this earth, Jesus calls us to a surrendered life - which, miracle of miracles, turns out to be a life of true freedom. He will never force us to make the choice to give our lives fully to Him. It is ours to decide.  But who will stand for truth if the Church is silent? Who will light the way out of darkness if the Church remains behind closed doors? How will the world know the good news of salvation if no one teaches them? How will they know love if we don’t live His love?

24 “Then Jesus said to His disciples, “If anyone desires to come after Me, let him deny himself, and take up his cross, and follow Me. 25 For whoever desires to save his life will lose it, but whoever loses his life for My sake will find it. 26 For what profit is it to a man if he gains the whole world, and loses his own soul? Or what will a man give in exchange for his soul? 27 For the Son of Man will come in the glory of His Father with His angels, and then He will reward each according to his works.”  Matthew 16

22 “But be doers of the word, and not hearers only, deceiving yourselves. 23 For if anyone is a hearer of the word and not a doer, he is like a man observing his natural face in a mirror; 24 for he observes himself, goes away, and immediately forgets what kind of man he was. 25 But he who looks into the perfect law of liberty and continues in it, and is not a forgetful hearer but a doer of the work, this one will be blessed in what he does.” James 1