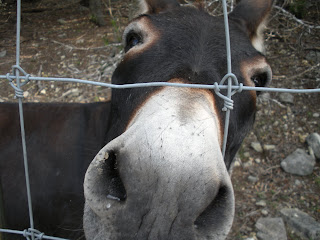 This is Jack. He lives just up the road "a piece," and I pass by his house when I go for my walk. Several goats used to live there too, but Jack is all alone these days. I think he is feeling rather lonely.

When the goats were there, he pretty much ignored me when I walked by and shouted out a cheery "Hi Jack!" He was the one in charge and was quite independent. However loneliness took a toll, and he began to acknowledge my presence.

One day I pulled up a handful of long grass growing along the side of the road and offered him a little snack. He munched it right down, apparently savoring the addition to his usual diet of hay. Thus began a little routine of Jack walking along the fence-line when he saw me coming, waiting for his snack.

If ever I was lost in thought and walked by without stopping, I would be startled out of my reverie by the loudest braying you have ever heard. That miniature donkey was not about to be ignored.

Jack has modeled something I have been pondering in recent months. Seeking and persevering. He has understood that I can give him something he cannot get for himself, and he waits patiently for me to provide it. If I seem to forget, he loudly, persistently reminds me that he needs it.

The Lord has told me to seek Him. He alone has everything that I need. He is always there, unchanging and faithful. It is up to me to go to Him. There may be times when it seems He has passed me by, but He has told me to be persistent in prayer. He hears and answers prayer.

If I, flawed and weak in so many ways, care enough about a little donkey to stop and gather grass or carry an apple in my pocket to give him, how much more does my heavenly Father care for me?

Blessings,
Linda
Posted by Linda at 10:29 AM