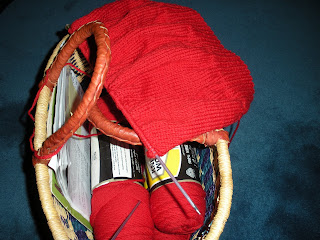 Mom was sorting through the antique chest that holds much of her handwork and discovered several skeins of wool. She says she can't even remember why she bought them but wondered if I could knit her a sweater.

Of course I could. She has filled my home and heart with the beautiful work that flows from her hands - quilts, pillows, dolls, a little braided rug - so many things that add that intangible something that makes a house a home.

She found a pattern she liked, and I began. All went well until I noticed a dropped stitch. It was several rows down, but I managed to weave it up to the row where it belonged. Whew! I wanted this sweater to be perfect, and a dropped stitch would never do.

I continued knitting and purling row after row, and the sweater began to grow. I pressed it flat with my hands to check my work and there it was - one stitch that was noticeably bigger than the others. It must have been the stitch I had had to pick up. Somehow I hadn't gotten it quite right. I tried hard to ignore it, but - to my eyes - it stood out like a sore thumb.

I continued to knit, trying to decide if I could live with that flaw. There was a part of me that wanted to rip it out down to that imperfection and begin again from there. There was a time when I would have, did in fact. I just couldn't bear to have mistakes in my work.

Perhaps it is the passing of time, the years it took to realize that I don't have to be perfect, that allowed me to overlook the mistake. More importantly, it is the understanding that I don't have to be perfect to win the Father's approval. He understands that I am but dust. He extends the love and grace that make it possible for me to fail, find forgiveness and then go on.

In His kingdom, I find a place where I can come with my dropped stitches and imperfect sweaters and know that He loves me just as I am. And miracle of miracles, He will take what is imperfect and make of it something precious in His sight. He only asks that I keep on "knitting."