In Defense of Santa 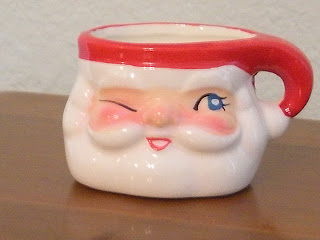 The days are slipping by so quickly, and I long to slow them down - to savor this time. I love soaking in all the beautifully written things about the true meaning of Christmas, listening to the familiar carols and looking with wonder at the miracle of the Gift.

I have a little confession to make, however, that involves my childhood, Santa, visions of sugar plums, stockings hung by the chimney with care and leaving milk and cookies by the easy chair. I wonder if it would be all right to take a lighthearted look at Christmas...just for a little bit; because intermingled with all of the spiritual, I have images of make believe that always surface during this season. There is one in particular that is as vivid today as it was nearly fifty-five years ago.

I was old enough, that year, to have come to the bitter-sweet conclusion that Santa Claus wasn't real. However my little sister , four years younger than I, was still a firm believer. My Dad, Mom and I became co-conspirators in keeping the dream alive for just a little while longer. We never lost the baby Jesus in all of this, we just allowed Santa to have a part too.

It began snowing earlier in the day that Christmas Eve and was accumulating quickly. The snow plows had cleared the streets of our little sub-division, but by the time darkness fell we were snowed in. The little houses and yards were nestled under a soft white blanket, and the world was hushed.

Little sister was already tucked into bed, having set out the plate of Christmas cookies and glass of milk for Santa, when the silence was broken by a knock on the front door. We couldn't imagine who would be out on such a night. We looked questions at one another as Dad went to open the door. There on the front stoop stood a rotund figure clad in red and dusted with snow. He stepped into the living room, and we were transfixed.

Dad went to get the little sleepy head and carried her, tousle-haired and sleepy-eyed, to see our night-time visitor. I will never forget the look of wonder in her eyes. It was a magical moment.

I don't remember what was said. I just remember the sweetness of the moment. Santa didn't stay long. He had a long night ahead of him. When he stepped out into the night, we gathered at the door to watch.

He walked down the center of the snow-filled street. The soft light from the street lamps illuminated the swirling flakes and shone down on Santa as he disappeared into the night. That picture, like the most beautiful of Christmas cards, is imprinted on my heart. I take it out every Christmas and marvel.

I see the picture of one who came with no other motive than love. One who gives lavishly with no thought of receiving anything in return. One who is no respecter of persons - visiting both the lowly and the mighty - knowing each by name. One who takes the time to make dreams come true even for little girls.

Perhaps, forgive me if I over-step, just perhaps Santa might be a tiny picture of The One who came with no other motive than love to bring the greatest gift of all.

Christmas Blessings,
Linda
Posted by Linda at 11:25 AM