What Became of the Shepherds? 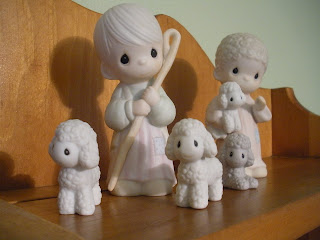 "That night there were shepherds staying in the fields nearby, guarding their flocks of sheep. Suddenly, an angel of the Lord appeared among them, and the radiance of the Lord's glory surrounded them. They were terrified, but the angel reassured them. 'Don't be afraid!' he said. 'I bring you good news that will bring great joy to all people. The Savior - yes, the Messiah, the Lord - has been born today in Bethlehem, the City of David. And you will recognize Him by this sign: You will find a baby wrapped snugly in strips of cloth, lying in a manger.'
Suddenly, the angel was joined by a vast host of others - the armies of heaven - praising God and saying,
'Glory to God in highest heaven,
and peace on earth to those with whom God is pleased.'
When the angels had returned to heaven, the shepherds said to each other, 'Let's go to Bethlehem! Let's see this thing that has happened, which the Lord has told us about.'
They hurried to the village and found Mary and Joesph. And there was the baby, lying in the manger. After seeing Him, the shepherds told everyone what had happened and what the angel had said to them about this child. All who heard the shepherd's story were astonished, but Mary kept all these things in her heart and thought about them often. The shepherds went back to their flocks, glorifying and praising God for all they had heard and seen. It was just as the angel had told them."
Luke 2: 8-20

There the story of the shepherds ends. What a story it is. Heaven itself opened up to these humble men and the glory of the Lord surrounded them. Surely their lives could never be the same.

I have thought about them - about what happened in the days following those miraculous encounters. The scriptures tell us they went back to their flocks, back to their ordinary lives. Did they wonder what would happen next? As the days slipped into weeks and eventually into years, and the images of that long ago night began to fade, did they begin to have nagging little questions and perhaps a bit of doubt? During the long lonely nights on the very same hillside, did their gaze shift heavenward hoping for a further sign? Did they long to hear news of the baby and His parents? Were they discouraged when it looked as though He had simply vanished?

Thirty years later, did word reach them about the young carpenter from Nazareth who said He was the Messiah? Did they hear of the miracles and did their hearts race at the news? Were they waiting expectantly for the Promised One to take His rightful place? Did their hearts break when news of His crucifixion reached their little town?

I wonder (I hope)if the news of His resurrection somehow reached them. If it did, did the vision of that long ago night burst into their hearts once again? Did they see, in their mind's eye, that little baby now become their Savior? Did they rejoice once again knowing the long wait was over; the promise was fulfilled? Fulfilled in a way they could not possibly have foreseen. How could they have known that the little baby they saw that long ago night would one day live in their hearts? It was even more glorious than they had imagined.

What does this story of the shepherds have for us? What would they like us to know and understand? Perhaps it is this:

Have you ever had a glorious word from the Lord, a promise that He spoke to your heart? Perhaps the promise of something you had prayed for with great urgency or a dream He birthed in your heart. Not only did you have that word, but it was confirmed in ways that could only be from Him. You believed and waited for the promise to take form.

Days slipped into weeks, weeks into years, and you began to doubt that you heard correctly. Discouragement filled your heart, and you thought the promise would never materialize. But remember...

The shepherds didn't know what had become of the baby. They didn't know that "...the child grew up healthy and strong. He was filled with wisdom, and God's favor was on Him." (Luke 2: 40) While they waited, the promise was taking form. While they wondered when He would appear again, He was working at a carpenter's bench. When they grew discouraged, He stepped onto the stage and began the work His Father has sent Him to do.

While we wait, the Father is working. In His way and in His time, He will do what He has promised.

"Let us hold tightly without wavering to the hope we affirm, for God can be trusted to keep His promise."
Hebrews 10:23


Christmas Blessings,
Linda
Posted by Linda at 11:58 AM