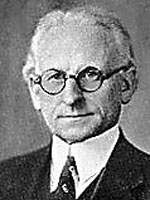 "I was praying for a full understanding for the cross and its plan in
Christianity. I read and studied and prayed. I saw Christ and the Cross
inseparably. The Christ of the Cross became more than a symbol… it was like
seeing John 3:16 (For God so loved the world, He gave His only begotten Son,
that whosoever believeth in Him should not perish, but have everlasting
life.") leave the printed page, take form and act out on the meaning of
redemption. While watching this scene with my mind's eye, the theme of the
song came to me, and with it the melody." —Rev. George Bennard

George Bennard was born in Youngstown, Ohio on February 4, 1873. He was saved while attending a revival meeting sponsored by the Salvation Army. At the age of sixteen, after the death of his father, George assumed the responsibility for his mother and four sisters.

When those responsibilities lessened he married. Both he and his wife served as officers in the Salvation Army until the time George felt the call to evangelism. He became a traveling evangelist for the Methodist church and traveled throughout Canada and North and Central America preaching the good news of the gospel.

It was during this time that he wrote the hymn "The Old Rugged Cross." It was first published in 1915. After it's publication, which was received with great enthusiasm, George went on to preach for forty more years. He died in 1958 at the age of eighty-five.

On a hill far away, stood an old rugged cross,
The emblem of suff'ring and shame;
And I love that old cross where the dearest and best
For a world of lost sinners was slain.

Oh, that old rugged cross so despised by the world
Has a wondrous attraction for me;
For the dear Lamb of God left his glory above,
To bear it to dark Calvary.

In the old rugged cross, stained with blood so divine,
A wondrous beauty I see;
For 'twas on that old cross Jesus suffered and died,
To pardon and sanctify me.

To the old rugged cross I will ever be true,
Its shame and reproach gladly bear;
Then he'll call me some day to my home far away,
Where his glory forever I'll share.


So I'll cherish the rugged cross,
Till my trophies at last I lay down'
I will cling to the old rugged cross,
And exchange it some day for a crown.