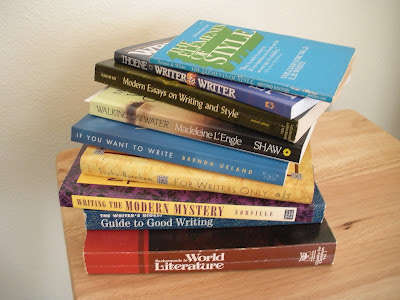 Sometimes I sit here with an idea filling my heart and brimming over, eager to come to life.  However, if I decide to read what others have written first, the idea seems to shrink until it simply slips away altogether. Their words feel so big and mine so small.

I am beginning to understand feeling small is a good thing. It makes me run to Him with all my insecurities. He tells me what He thinks, and it takes my breath away.

Twelve years ago a little seed of an idea began to put down tentative roots in my heart. I bought a book about writing mysteries. I read it. I thought about different ideas. I let them shrink away. The book collected dust in its assigned place on my book shelf.

Months and months ago the little seed I thought had long since died began to pinch the corners of my heart. I bought more books - hoping to learn enough to somehow become at least a competent writer. The pull toward story became almost irresistible and a lady named Matty walked into my imagination. She was insistent that she had a story to tell. I felt inadequate to do the telling.

I have a Father who has infinite patience and immeasurable grace. I talked to Him about the story - gave Him all the reasons it wasn't a good idea. He kept gently nudging me to give it a try. I would put out a fleece (even though many find it a questionable tactic), and He would answer. I would be amazed - and begin to question Him all over again. Time and time again He sent words of encouragement in a variety of ways.  And that Matty.....she simply would not go away.

But I believe that I am supposed to give this a try. I've even made a  beginning. The funny thing is the minute I decided to do it, my computer decided it wasn't going to let me use my word processor! It took me forever to find a place to even begin (I'm not a computer whiz by any stretch of the imagination.).

One would think that at this season of life I would have all the time in the world to write. I don't. My days seem to fill with so many things, and the hours of quiet are few and far between. I'm going to try to take advantage of those times, so I will be limiting my time here. I will still write my posts, but I won't have as much time to visit or comment. It is so hard to write those words. You have become such precious friends, and I don't want to lose touch. I will do my best to visit whenever I can.

So....I'm really going to do this. I have no big plans. I don't know a thing about writing books (hence that big pile of books on writing). I'm just going to tell Matty's story (a bit of a mystery) as well as I can. I can't even manage to think of myself as a "real" writer. I just love words.  So I'll give it a go. It may never see the light of day (quite likely), but perhaps my family members will read it.

There....I've done it - committed myself in actual writing. You may hold me accountable. I'm the kind of person who needs it!