My Dad and D-Day 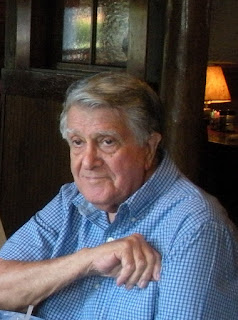 Sixty-eight years ago today, my Dad drove a jeep off a landing craft and into the ocean. The plan was to drive up onto Omaha Beach, but things didn't go according to plan. They weren't able to get close enough to shore and the jeep's engine died as the water closed over its hood.

This twenty-four year old man, who had never been out of his own neighborhood until that fateful year, walked onto the beach and into an unimaginable nightmare. He says they got it just right in the movie "Saving Private Ryan." He was part of the 29th division and saw it all first hand.

He isn't one of the silent ones. He tells us the stories - editing out the parts that must surely haunt his dreams at times - but breathtaking nonetheless. I love the one about the time he went AWOL and spent a few exciting days in Paris. Or the ones where he is demoted to private (again) because he doesn't suffer fools lightly - even if they happen to be wearing officers' stripes. My heart aches when he tells of liberating one of the concentration camps.

He left behind a sweetheart who wrote faithfully every day. She wanted to get married, but he knew the odds and felt it best to wait. Time was suspended as she waited through the years until the day he walked through the door of the office where she was working. Sixty-six years later, they are still the dearest of sweethearts.

These days I watch as the great-grandchildren sit spellbound by the stories I've heard a dozen times or more. They never get old, and he remembers the details as if it were yesterday. He is a hero in our eyes and in the eyes of his country.