Stretching For the Dream 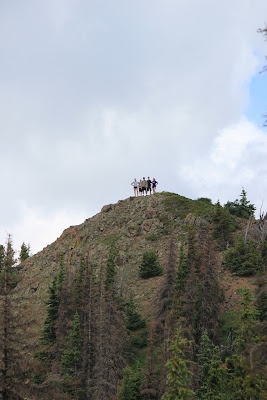 Our word for this week's Five Minute Friday is "stretch."

It was nearly thirty years ago. The last little one had gone off to school, and I had hours in my hand to use in any way I chose. In the afternoon, I would sit on the front porch, notebook in hand and write the poems I had been storing up all those years.

Then came the announcement in the church newsletter - a writers group. I timidly took myself and my notebook and found a group with dreams like mine. It was like heaven.

Years later, the members had gone their separate ways, but a little seed of a dream had been planted in my heart. I bought a book about writing a mystery. I read it. It sat in the little cubby hole in my desk for a dozen years or more.

Several months ago the little seed began to rub up against the wall of my heart. I told it not to be silly. I was a blogger now. I read other blogs. They were the real writers. I was absolutely not in that league.

But the rubbing continued, and I asked the Maker of dreams if He was in favor of this one. He said He was. And so I began. It has been pure joy. The words form on the screen and people come to life who have lived somewhere in my imagination for a very long time.

I don't imagine anything will come of it, but it will be a dream fulfilled - just the doing of it. I'll print out a couple of copies for my husband and my Mom (who have been my cheering section as they read the pages) and feel as though I've stretched myself right up to the top of that mountain.

Blessings,
Linda
Posted by Linda at 10:37 AM