A Little Touch of Love 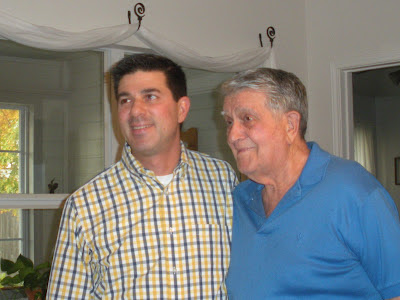 He called before they got to the house, so I knew. When they pulled into the driveway and carefully made their way through the garage and into the house, I could see it in their faces. Mom looking a wee bit exasperated; Dad wearing a sheepish grin.

He remembered putting his wallet into the basket of the motorized scooter at the big warehouse store. When he got home, it wasn't in his pocket where it belonged. They stopped at the store on the way to our house, but no one had turned in a wallet. They checked in the lost and found.

Mom and I sat on either end of the couch - Dad in the little armchair across from us. While she made the call to the credit card company, he went over and over the events of the morning. He scratched his head and smiled, berating himself for his forgetfulness. We tried to reassure him - telling our own stories.

My heart hurt a little as I looked at him. This Dad who had always seemed larger than life. The one who never backed down when he knew he was right; the one who boldly stood alone when truth was on the line; the one who would argue with me just for the fun of it ("I just wanted to see if you really believed what you were saying.") - and he seemed so small and vulnerable. I, the little girl who had ridden high on his shoulder, wanted to somehow lift him u[ on mine.

Three days later, on a hot sunny Sunday, we went out to dinner to celebrate Mom's 89th birthday. We had a lovely dinner - just the four of us (Mom, Dad, Steve and I). As it turns out, the big warehouse store, the scene of the forgetful incident, was right behind the restaurant.

"I'm just going to stop and run inside to see if anyone has turned in your wallet," said my husband.

A chorus of negativity greeted his optimistic statement. "No one is going to turn it in after all this time. Whoever took it just took the money and threw the wallet away. Don't bother. It's too hot!"

Not one to be easily discouraged, my husband pulled into a shady area, and went into the store. We all watched as he made his way back to the car a few minutes later - empty handed.

He delivered the line with a straight face, "Yes, they have it. They won't give it to me. Dad will have to come in and get it."

Several minutes later we continued the drive home, Dad's wallet tucked safely in his pocket. Not one single thing was missing - not even the cash.

Mom summed it up for all of us. "I've been praying someone would find it and turn it in. God answers prayer."

Yes He does. And He always does it with blessings we hadn't thought to ask for. He gave Dad a little something extra that day.

Picture: Dad and our oldest son