The Rest of the Story (And a Confession)


I am a "happily-ever-after" girl. One would think over six decades of living would have taken a bit of the polish off that sparkly dream, but it hasn't. Even with all the ups and downs, heartbreak and disappointment I continue to hope for the happy ending.

On Saturday there were only two of the six cardinal babies left in the nest. I was concerned at first about their well-being. It didn't look as though the parents were feeding them any more. They were a bit preoccupied with the ones testing their wings.

However, in time they returned to feed the littlest ones - one a bit stronger than the other. Before long this one began bravely making his way to the edges of the plastic stems. He sat poised for the longest time. Suddenly he was gone. I caught a glimpse of him (perhaps her?) clinging to the oak nearest the porch - Papa tweeting encouraging words from one of the branches a little higher up.  Then they were gone. 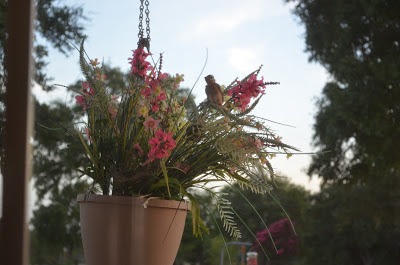 And there was one left - looking so forlorn and lonely. All afternoon I listened to the cheeping - a continuous cry for Mama and Papa. Every few minutes I went to the window to look, but there was no sign of them. I willed them to come back for this one tiny one - the one who wasn't ready to test his wings. 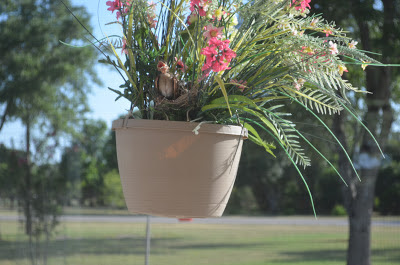 We had plans to go out for dinner. Just before we left I checked the nest, and it was empty. I peeked around the front door, and sure enough, there he was on the porch - looking at the brick wall - so small and confused. We left with hopes that the parents would come and help - fearful that if we interfered they would certainly abandon him. 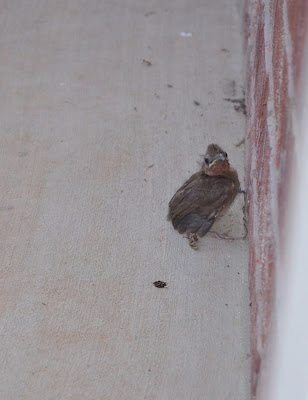 The front porch was empty when we got home. I breathed a sigh of relief - surely they must have come to rescue their littlest one. But the sound of cheeping a short distance from the house made my heart sink. There he was - huddled in the grass.

I decided I should try to do something. I have no idea what that something should have been, but I thought I could possibly put him back in the nest or even take him in the house (I even put on a mitten so they wouldn't get my scent if they did come back. I know.) I crept up slowly, and at first he just sat looking up at me. I heard a cardinal somewhere close by, so I quickly ran back in the house - ever hopeful.

However, it was soon apparent there would be no help coming from Mama and Papa (I felt a bit upset with them - abandoning this poor helpless one.). I went back outside and began a slow approach. He was not so docile this time. He began running and flying in little hops - never quite getting up enough steam to actually fly very high but always staying just out of reach. I finally gave it up, afraid I would scare the poor little thing to death, and went back inside.

So, no happily-ever-after to this story. I don't see how he could have survived on his own. Toward morning it rained, and I felt so sad I hadn't done something more. So sad at the harshness of life. I looked for any sign of him - but there was nothing.

I am a "happily-ever-after" girl. I believe there is One who will make all things new. One day our Prince will come, riding on His white horse, and all the forces of evil will not be able to stand against Him.  We will live in a glorious mansion in a beautiful city and we will live happily ever after.

"Yet what we suffer now is nothing compared to the glory he will reveal to us later.  For all creation is waiting eagerly for that future day when God will reveal who his children really are. Against its will, all creation was subjected to God’s curse. But with eager hope, the creation looks forward to the day when it will join God’s children in glorious freedom from death and decay. For we know that all creation has been groaning as in the pains of childbirth right up to the present time. And we believers also groan, even though we have the Holy Spirit within us as a foretaste of future glory, for we long for our bodies to be released from sin and suffering. We, too, wait with eager hope for the day when God will give us our full rights as his adopted children, including the new bodies he has promised us."
Romans 8: 18-23