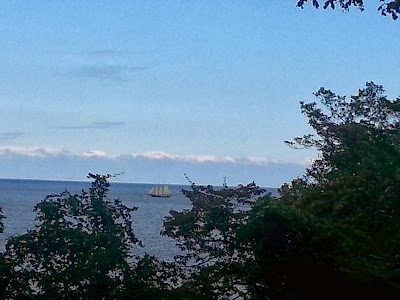 From the earliest days when I watched in fascination as my Sunday School teacher placed  figures on the flannel-graph board right up until this very day I've loved Bible Stories. In my little girl mind the characters that peopled those stories were larger than life. As I've gotten older most of them have come to look a bit more like me, and I read the old stories in amazed wonder that God would entrust ordinary folks with such vast treasure.

They didn't live perfect lives. In fact there were times their falls from grace were spectacular. That comforts me. What comforts me even more is reading what God has to say about them. Take Noah for example:

"It was by faith that Noah built a large boat to save his family from the flood. He obeyed God, who warned him about things that had never happened before. By faith Noah condemned the rest of the world, and he received the righteousness that comes by faith."
Hebrews 11:7

Noah's life wasn't perfect. After the rains and the flood, after the long endless days on the ark, after landing on dry ground, after the rainbow, Noah got drunk. That part isn't mentioned in Hebrews 11 where God honors those of great faith.

It isn't Noah's failure that is enshrined in that great chapter. It is his faith - his extraordinary trust in God's character.

It had never rained on the earth in Noah's day. Not one drop. But God told him to build an ark because He was going to send a great flood that would cover the whole earth. Noah believed Him.

He began to build a boat the length of one and a half football fields and as high as a four story building. On dry land. Where it had never, ever even rained. The neighbors must have had a field day with this one.

On top of that, he began to collect animals and put them in this great big boat. Noah and his sons were the laughing stock of the world - until the first raindrops began to fall. Everything God had said came true. The only ones saved from the catastrophic flood were Noah and his family. The only ones who trusted God and believed His word.