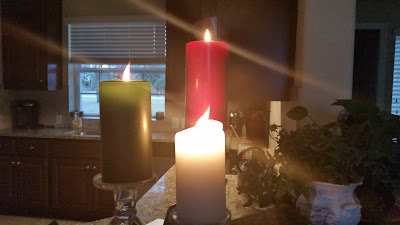 I have come late to Advent. It wasn't something practiced in our denomination, but on Sunday I struck a match and lit the candle of hope. It took a certain amount of courage. Not because Advent is something new -but because I am going through a season where the candle of hope is sputtering a dying breath.

One heartache after another weighs down the heart and prayers seem to echo into nothingness. An on-going legal battle. A husband whose fragile sight is threatened. A mother who has suffered a stroke. A father who worries over his bride of nearly 70 years. A dear friend diagnosed with cancer. The son of another precious friend gone in one heartbreaking moment. And hope struggles to catch fire.

I step timidly into advent and try to imagine myself wearing the sandals of an unwed teenager, heavy with child. The circumstances surrounding her were anything but hopeful. Her people suffered under the weight of an unjust government. Poverty camped outside their door. Daily she faced the scorn of those who thought her less than - certainly not worthy to be the mother of the promised Messiah.

Yet she carried hope. The promise of God nestled under her heart. Right in the midst of all the suffering and sorrow - hope lived and breathed, waiting for the moment of release.

Yesterday I listened as a broken-hearted father, in his eulogy to his 27 year old son said, "God is good," and something in my heart burst open. A tiny spark of hope ignited. Yes. He is good. No matter the outward circumstances - He is good. Words will never explain it. It is something only the heart can understand. He is good. He is love. He is my hope.