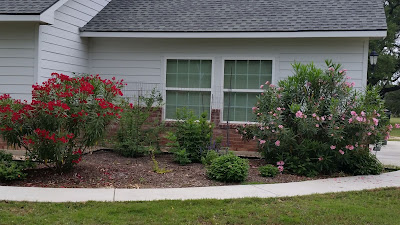 I've wanted a plumbago plant for a long time. My neighbor has a few in front of her porch. I love the way they grow - full and lush with those lovely blue blooms. I figured since they seemed to be doing well for her, it's a good bet the deer don't like them. After all, they don't have a fenced in yard either.

My sweet husband went to the nursery to buy one for me while I was recovering from my foot surgery. He planted it in the spot I had reserved for it - right between the two oleander plants. I thought that would give the plumbago a little extra protection just in case. The oleanders are poison, and the deer apparently know that.

By the next morning, we discovered that a) deer do indeed like plumbago plants and b) they had discovered ours, eaten it down to two long sad stems and didn't even bother to leave a thank you note. I'm thinking about moving on to plan B - buying a miniature windmill, which is entirely inedible, and putting it where the plumbago plant is currently lying prone on the ground.

It has caused me to think about some of the other grand plans I've had during my lifetime, not many of which panned out exactly the way I thought they would. In the interest of sharing a life-lesson or two, I'm going to be brutally honest. Besides, I think sometimes it's good for the soul.

Back when our kids were young and in school, I would go out on our little front porch in the afternoon and write poems - for no particular reason other than I liked to do it. Then someone in our church started a writers' group, and I joined. Suddenly a whole world of possibilities opened before me - and a plan began to form. Surely God had been in the timing of all this, and therefore He must want to use this in my life to do something - I don't know - BIG!

The only thing to come out of that little group was a devotional for our church. In time, the leaders moved away, and the group just sort of fizzled. However, a tiny seed of an idea had formed - an idea to write a mystery. I bought a how-to book, and then life took a turn. Instead of the writing path, God had another journey in mind. That's a story for another day.

Fast-forward about twenty years. I discovered blogging and immediately decided this was God's new plan. At long last - a writing ministry. I plugged away at it, watching as so many of my fellow-bloggers succeeded in ways I had only dreamed of - huge numbers of readers, book deals, and speaking engagements. Once again, I understood God's plan for me looked a lot different from the one of my dreams. I learned to be content in the place He had given me. Or, well, almost content.

The mystery book seed began to germinate in my heart. I prayed about it and was convinced this was it! I would write this book and God would use it in some way. I'm so prone to starting big and petering out long before I reach the goal, but this time I stuck to it. I worked hard, got help from a wise and patient mentor and actually wrote a book.

Things did not go according to my plan. After several rejections, I tucked it away in the tray on my desk. There it sits.

I looked back over the past week in my little daily planner. My life is predictable these days. I felt the familiar stab of discouragement, until I was reminded of something the Lord has been whispering into my heart for a long time. I don't have to do BIG things. I only need to be faithful to do what He has asked of me.

One afternoon, on a visit to my Mom and Dad, my husband and I played Bingo with the other residents of the Assisted Living. I sat and listened to the soft voice of an elderly lady tell me about her son and her grandson. The woman sitting next to my Mom told about the years she and her husband lived in Italy. Her face shone with the memories of afternoons on the porch with kind neighbors, shared food and happy gatherings. It was sweet. I even won a game!

We did our volunteer work at church on Tuesday; went to choir practice on Wednesday, walked together most days and went to the inevitable doctor appointment. I made eggplant parmigiana - with an extra batch for Mom and Dad.

None of those things are the things I imagined doing at this season of my life. I somehow imagined adventurous things like mission trips, and since my husband's health didn't permit those I brought my other plan to God's attention. I've learned He doesn't need my advice.

I don't know where tomorrow will take me. I've decided it's enough to just be content with the life I've been given today. And the amazing thing is - that's where the blessings are. I can stop looking around for the BIG thing. I'm not much good at big things anyway.

P.S. I had a picture of my sad plumbago plant, but blogger refuses to let me post it. I'll try to put it up on my Facebook feed. The best laid plans :)
Posted by Linda at 5:31 PM