A Prologue To Epiphany

For three years in a row they've come to set up housekeeping in the hanging planter right outside my kitchen window. Of course, I can't be certain it's the same Cardinal couple every year, but I like to believe it is. They have graciously given me the best seat in the house to view one of God's sweet miracles.

I watch them fly back and forth, tiny bits of grass and twigs in their beaks, as they construct a safe and welcoming nest for the little-ones-to-be. Once it's completed and the eggs are cocooned within the confines of their little home, Mama settles herself in to wait.

Her serenity and patience speak volumes to me. Sometimes the wind sends the planter swinging wildly back and forth. She remains steadfast. I've seen her sit through downpours, while lightning flickered overhead and thunder rolled. All day and night, with only the briefest of breaks, she guards her eggs.

And then one day I see them, little heads with wide open mouths peeking up over the edge of the nest. They are babies only a mother could love - with their bald heads and featherless bodies. Mama and Papa now begin the arduous task of keep their little ones fed. It seems they are never satisfied. No sooner have those empty mouths been filled than they are squeaking for more. 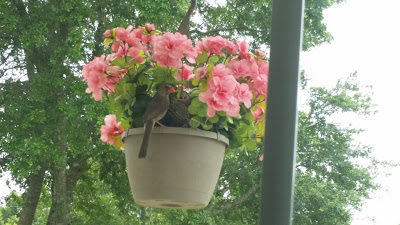 In a surprisingly short amount of time, those scrawny babies have filled out. They now look adorable - covered in soft, downy feathers. Not quite ready to take flight, they perch on the edge of the nest - contemplating the big, wide world. 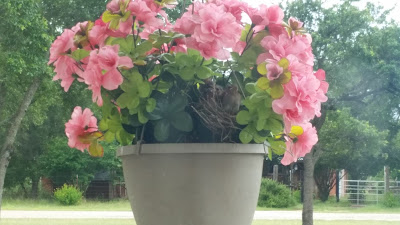 There is always one, bigger and stronger than the others, who is the first to spread his tiny wings. His first flight is tentative and brief. But little by little he gets the hang of this flying business, and he's off. Mama and Papa watch. They are never far away - offering encouragement and a bit of advice (I imagine.) to their fledgling. 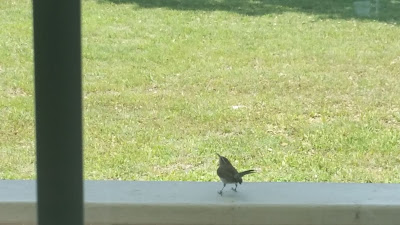 One by one they leave the nest under those same watchful eyes.

This spring, the nest-leaving looked a bit different. I watched as two of the babies took flight. Then I got busy and missed seeing the others. When I went to the kitchen sink later that day, I looked out of the window and noticed one of the babies on the porch railing. I thought it was dead - that it had attempted to fly away with the others and fallen onto the rail.

Just as there is always one a bit stronger than the others, there is one who is smaller and weaker. This little one still hadn't even gotten all its feathers. It looked half naked and forlorn. I stood watching - not quite knowing what to do.

Then my heart skipped a beat. He lifted his poor little head, fluttered weak wings and cried and cried. I kept hoping the parents would come and somehow rescue him, but there was no help in sight.

After a bit of hand-wringing, I grabbed a tissue (in an attempt to keep my human smell from getting on him - and, truthfully, I didn't really want to touch him) and ran out to the front porch. Timidly (I am such a coward) I picked him up, put him back in the nest and ran back inside. I stationed myself by the window and prayed help, real help, would come.

It arrived in the form of Papa Cardinal, carrying food in his beak. He bent over the nest, and I breathed a sigh of relief. I was so sure all would be well.

The next day, my husband went to check on things. He found the lifeless body of that poor little baby lying in the bottom of the nest. I felt so terrible. Why would the parents abandon this one? They had cared for them with such devotion and then to leave this one to die all alone. All that little one needed was a little more time to grow stronger. It just didn't seem fair - or right.

I write this as a prologue to my story about my "epiphany." It happened during a difficult season for my family. Somehow it became a metaphor for my life at that moment. It could have been titled: "Life Is Hard." It mirrored all of the disappointment, heartache and just plain weariness. It somehow added to the already heavy weight that had settled right around my heart.

P.S. I'm sorry to leave this at such a discouraging place when my heart's desire is to encourage. Just remember, this is only a prologue. The rest of the story is coming.