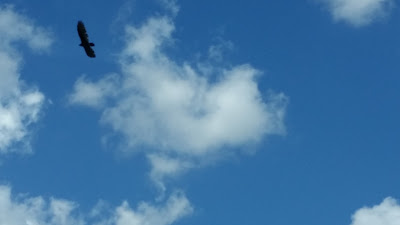 Once upon a time there was a tortoise who lived by a little pond in a little town in Texas. For many years he contentedly spent his days exploring the nearby meadow, searching for food and visiting with his fellow tortoises. However one day, feeling a bit adventurous, he decided to leave his familiar neighborhood and do some exploring.

As he meandered down the little road which ran alongside his meadow, he chanced to look up into the sky which until now had been hidden from his view by the tall grasses and large trees. He stopped to admire the puffy white clouds and blue sky. He thought it all so fascinating and stood for a long time gazing up.

He had just resumed his walk when an astounding sight caused him to stop dead in his tracks - a bird soaring high among the clouds. He had never seen anything like it. There was no furious flapping - he simply extended his powerful wings and rode the air currents into the heavens.

Such a graceful, beautiful sight, thought the tortoise. How he wished he could fly above the earth like that, instead of having to plod slowly along with the weight of his home forever on his back. His sighed deeply and continued his walk.

He hadn't gone far when he came upon another sight that caught him completely by surprise...

Please click on over to Laced With Grace to see the surprise:

Blessings,
Linda
Posted by Linda at 9:00 AM