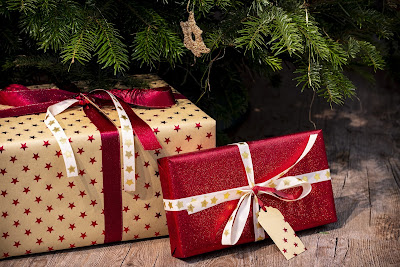 This year would be different. Instead of waiting until the last minute, wandering up and down store aisles searching in vain for inspiration, she began weeks in advance of Christmas. Thoughtfully, she considered each loved one for whom she wanted to buy a gift - the things they loved or had perhaps spoken about in a random conversation, the perfect compliment to those things they enjoyed doing.

She began her shopping before the rush of holiday shoppers, taking the necessary time to find exactly what she had in mind. A sense of joy and a certain peace flooded her soul as she imagined the happiness her gifts would bring.

As the days flew by toward Christmas, she felt her anticipation grow. The carefully wrapped gifts were placed under the fragrant tree, waiting for eager hands and hearts.

In the early morning darkness of Christmas Day, she slipped quietly into the living room and sat in the soft glow of the tree lights waiting for the others to make their way downstairs. Moments later the silence was shattered as they woke up and began calling to one another to hurry downstairs and see. Her heart beat a bit faster as she watched them stop their mad dash and stand looking in awe at the treasure under the tree.

She urged them to come and sit and open their presents, but they didn't move. Instead they stood there, eyes wide with wonder, and chose not to open a single gift. Her heart was broken.

As difficult as it may be to imagine such a scene, it is one that plays out over and over again. There is a God in heaven who has purchased a gift for each of us - one whose cost is beyond human calculation and worth more than anything the world has to offer. It comes with a love we feel unworthy to claim, but still it comes.

We give each other gifts at Christmas because He gave to us the Gift of gifts. He longs for us to receive it. He thought so much of each one of us, loved us so deeply, He gave His beloved Son. Through His life, death and resurrection He gave us everything we ever hoped for.

We need only accept the gift.


“For God so loved the world, that He gave His only begotten Son, that whoever believes in Him shall not perish, but have eternal life." John 3:16
Blessings,
Linda
Posted by Linda at 9:29 AM