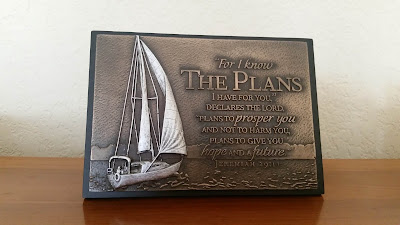 A week has passed since the beginning of a new year. Many came to it with hope and determination, looking forward to a fresh start. Others, jaded by years of failed resolutions, look back with feelings of discouragement, regret and guilt. Have I, they wonder, ruined the plan God had for my life by my inability to change and make right choices? Have I squandered the gifts I've been given and lost the chance to realize the dream?

On the very first page of my Bible I have a written note from a long ago sermon. It says:

"God has a plan for my life and the power to carry it out. As I obey, I walk into the plan God has for me. God's plan reaches beyond all the mistakes of my past. In redemption, there is hope of a measure of recovery. I can only overcome my past in Christ."

I thought back to the story in scripture of one of the great heroes of our faith - Moses. God had a plan for his life. Against all odds, baby Moses survived when Pharaoh ordered the murder of every son born to a Hebrew woman. Raised in the palace by Pharaoh's daughter he became "a man of power in words and deeds." (Acts 6:22). When he turned 40 he was drawn to his own people who were suffering in slavery, and in an attempt to help ended up murdering an Egyptian.

The story is a familiar one. Moses, fearful for his life, fled to the land of Midian. There, he lived in obscurity for 40 years, until the day God spoke to him from a burning bush. This once powerful, articulate man tried to convince God he could not possibly be the man for the job. It was too late. He had ruined everything. He simply couldn't do it.

We know the rest of the story. God used Moses in a miraculous, powerful way to rescue His people from slavery in Egypt and to lead them to the Promised Land.

To all outward appearances it seemed Moses had blown it. Instead of waiting on God's timing, He had taken matters into his own hands and ended up a murderer. Surely, he had ruined the plan God had for his life.

We have heard it said that God never wastes anything in our lives. He used that long 40 years, years we might consider wasted, to shape Moses into the man He would use to deliver a whole nation of people - the man to whom He spoke "face to face, just as a man speaks to his friend." (Exodus 33:11)

We mustn't let the failures of our past rob us of the good things the Father has for us. He can redeem our mistakes and, although we may bear the scars and wounds of the wrong choices we've made, work out the beautiful plan He has for our lives.

I have another quote in my Bible I have treasured for years:

"God knows where you are, and He can get you to where He wants you to be."
Pastor Robert Emmitt

"For I know the plans that I have for you,' declares the Lord, 'plans to prosper you and not to harm you,  to give you a future and a hope."  Jeremiah 29:11

Blessing,
Linda
Posted by Linda at 8:40 AM