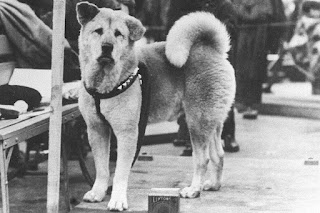 “ For the eyes of the Lord move to and fro throughout the earth that He may strongly support those whose heart is completely His.” II Chronicles 16:9

Hachiko, a golden brown Akita dog, was born in Japan in 1923. He  and his owner, an agricultural professor, formed an extraordinary bond - one that inspired everyone who knew their story.

Hachiko and the professor walked to the train station in their little town together every morning. The dog would watch as his owner boarded the train for his commute to the University and then head back home to wait for the moment the train would return with his beloved owner.

Hachiko could be seen waiting patiently at the station as the train pulled in promptly at 3:00 p.m. For nearly two years the owner and his dog followed the same pattern, until the day the professor died of a cerebral hemorrhage while at work. In his usual place on the platform, Hachiko waited for the man who would never again come back.

However, the brokenhearted dog continued to make his daily walk to the train station to meet the 3:00 p.m. train - longing to see the familiar face. He kept his vigil for nearly a decade until his death in 1935.

The Lord looks for people with that kind of devotion - faithful hearts that remain true to Him no matter the circumstances. Hachiko didn’t give up when people got annoyed or the weather battered his body. He didn’t give in to discouragement when it seemed foolish to hang onto hope.

The story of one small dog moves us. That kind of love and faithfulness is rare, even in the human heart. Prone to selfishness we easily give up when things don’t go our way. Difficult circumstances bring discouragement and waiting can cause us to give up hope. We forget the faithfulness and love of the God who longs to bless us in and through both joy and sorrow as we walk in faith and obedience.

What an astounding thought that the One who created the heavens and the earth longs for our love and faithfulness.

“Know therefore that the Lord your God is God; he is the faithful God, keeping his covenant of love to a thousand generations of those who love him and keep his commandments.” Deuteronomy 7:9