Help On the Way 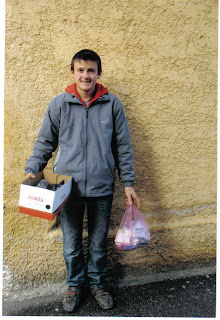 He had mentioned a time or two in his letters that his Mom was sick. We became concerned and called World Vision to see if there was anything we could do to help.

Correspondence between some of the poorer countries is anything but the instantaneous process we have gotten used to, and it was quite some time before we heard back from them. Without giving us too many details, they said Pellumb's Mom had been ill but was doing better. However, there were medicines she needed that they were having a great deal of difficulty paying for. We told them we would take on that expense for as long as was necessary.

It was easy to make the transaction. A credit card number and we were good to go. But once again there was the delay of all the necessary paper work and limited access to swift communication. So while we were breathing a sigh of relief that they would get the help they needed, they had no way of knowing it was on the way.
It would be some time before that help actually reached them.

I was reminded of that as I thought about some of the things we've been praying about for so long. It sometimes seems that nothing is happening - that the Lord has either not heard my prayers or has decided to ignore them for now.

I have come to understand that is never true. He always hears. He always answers. There are times the answer is no. In those times, I simply trust that He knows what is best for me. However, there are also times when He is in the process of answering, and I am simply unaware.

I think of Daniel, praying desperately for his people who had been held in captivity for years. In Daniel 10 it tells us for three whole weeks he had been mourning and fasting. Then an angel appeared to him and said, "Don't be afraid Daniel. Since the first day you began to pray for understanding and to humble yourself before your God, your request has been heard in heaven. I have come in answer to your prayer. But for twenty-one days the spirit prince of the kindgom of Persia blocked my way."

We have no idea what is going on in the heavenlies, but we may be sure of one thing. The Father hears our prayers, and He will never forsake us. He is never late. The answer will come right on time.

Blessings,
Linda
Posted by Linda at 11:47 AM